These days in France, on Saturdays in particular, it seems as if chaos is the order of the day. What started the third weekend last November as a protest against fuel price hikes and proposed tax increases, has escalated to a weekly brawl throughout France but notably in Paris and other large cities like Lyon where I have been living since August. Each Monday morning I check the news to see what went down, if anybody died, what happened to the protester who took up the tear gas canister to throw it back towards the riot police (he lost four fingers)  and to stare incredulously at photos of burning police vehicles as the Eiffel Tower stands defiantly in the background.

As an American living abroad I was strongly encouraged to sign up for state department alerts, you know, to keep me safe from terrorist harm. Well,  there’s nothing more anxiety provoking that starting each day with an official sounding email warning of a POTENTIAL terror activity/violent protest/police beat down and being left perplexed because the area of concern could just as well be my own living room or back yard. So what, I must just stay cooped up in my bedroom closet all day like a fowl? And what if the weather is beautiful and pleasant, or I have plans to meet up with friends for coffee and have to go out on the street? What must I do then? Stay home? To be safe? What point is the point of being safe if it means giving up your freedom to live your life as you please?  Life is a never ending game of risk analysis, the factors just differ depending on where you are in the world.

Public transportation shut down is a common theme of these protests. Whether it’s the metro workers the ones doing the striking or the Metros are shut down as a precautionary measure –  apparently tear gas leaking into underground stations make for an unpleasant and dangerous mix. But a few added miles of walking isn’t anything to cry about.

As for my general composure, I am glad I finally got a handle on  the extreme anxiety that plagued me for the first 4 months here. Triggered each time I came upon grim faced gendarmerie patrolling the streets with full military gear and matte black assault rifles, their fingers ever so close to the trigger.  Alert and ready to protect and in the process rendering me completely terrified. People can get used to anything. And I suppose I have finally gotten used to the bizarre aspects of living in Lyon, France. A city which seems to be constantly on a high alert for terror activity, and where civil service workers seem to love nothing more than a good strike or as they call them ‘manifestations’. The gilets jaunes are a special case though and after months of their antics I find myself a bit indifferent.

So now when I see things like grown men fighting each other in the street with gulf clubs I just watch them like it’s a soap opera and chuckle to myself. (from a safe distance of course). 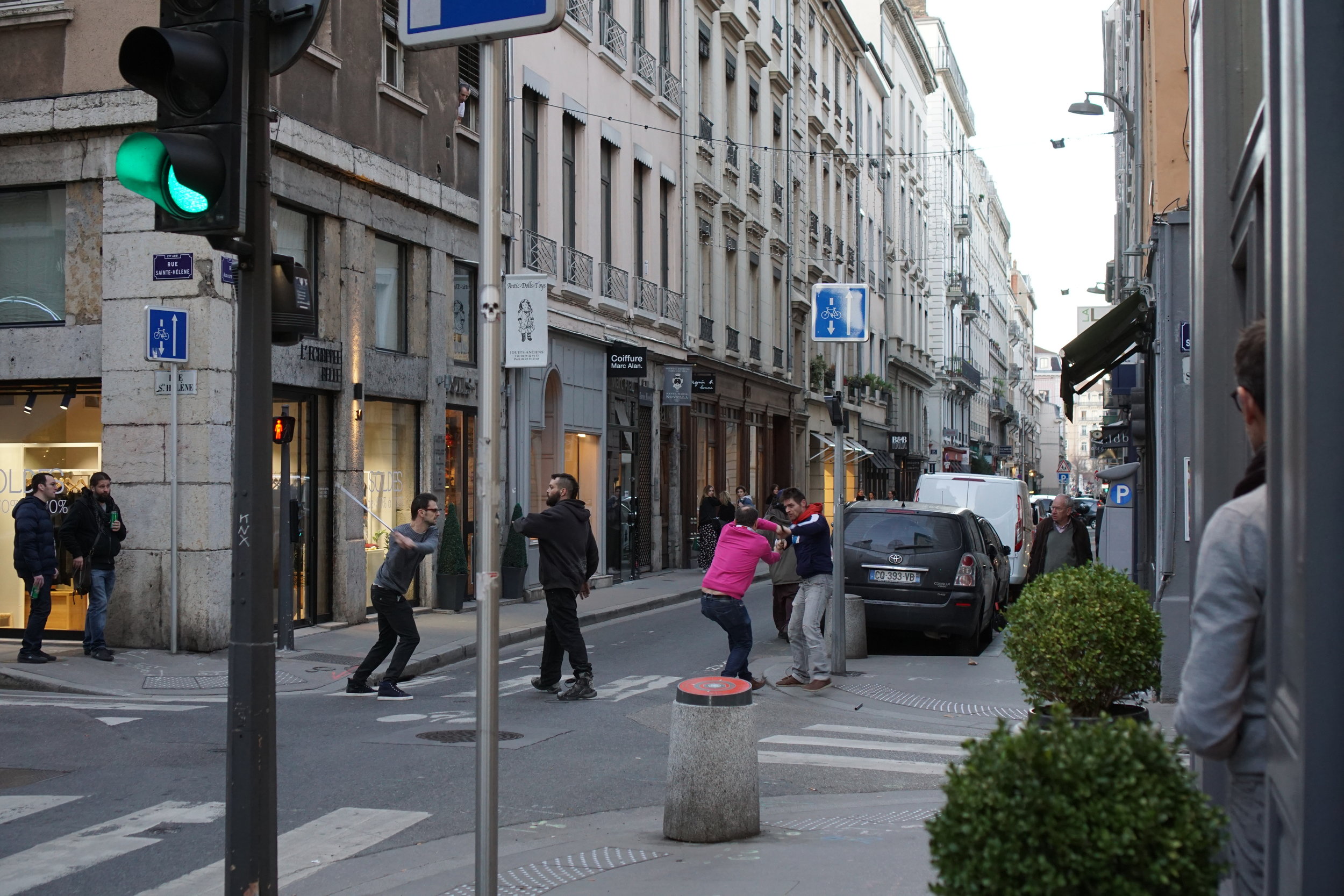 And when on a day like last Saturday I was in a shopping center that out of the blue closed all it’s exits (these aluminum garage type doors that appeared out of the blue) instead of panicking I simply found a security guard and asked him ‘qu’est ce qui ce passe?’. It turns out this was a precautionary measure to prevent the vagabond gilets jaunes from entering and wreaking havoc as they are wont to do.

A helicopter had been hovering in be distance for the entire afternoon and police sirens rang out continuously. I decided I’d rather not be trapped somewhere so found another security guard, one of the numerous who also seemed to have suddenly appeared out of thin air and asked him which exit was still open. Sure enough there was a small exit and the man guarding it said to go ‘tres vite’.

Outside in the unseasonably warm afternoon I wondered why any of this was necessary as among the normal looking people there was but a single weak looking yellow-vest clad man leaning against a post, just cooling out in the breeze.  As usual the French police and security system seems to do the absolute most to ensure safety. To the point where sometimes it feels like terror prevention in itself becomes terrorizing to the everyday citizen.

Tensions remained high throughout the day. I could see it on people faces and almost felt it in the flesh on my walk home, as I rightfully crossed the street while keeping eye contact with the luminescent green pedestrian icon flashing in front of me, a car came less then a foot away from knocking me down. I guess he was in a bit of a hurry. Unscathed, I shook  my head and said to myself ‘re- Bienvenüe a la France’